My feet began to burn as I immersed them into the swirling water churning inside the salon’s pedicure sink.  I didn’t care.  I knew it would only smart for a moment and then I could finally sit back and relax.  With three energetic kiddos, 6 years and under, relaxing is something I don’t often get to do.  At least, not for long!   I was determined to relish in this rare moment.

I glanced over at my friend who had joined me for an afternoon of uninterrupted pampering, and we shared a knowing smile.  FREEDOM!

With no children or household responsibilities to distract us, we chatted easily.  Meanwhile, the nail technicians went to work on our feet: massaging, exfoliating, and eventually clipping and polishing our toenails.  Never mind that no one would really see them.  It was, after all, January in Minnesota and our feet would soon be covered in smartwool socks and clunky winter boots.

I sipped my complimentary beverage as we moved from the pedicure chair to the nail station.  I admired the precision and skill of the technician as she went to work taming my seasonally dry curling cuticles, and then perfectly filing and shaping my obviously neglected fingernails.

She quickly applied three layers of smooth shiny polish before I was left to sit under the ultra-violet drying lights.  Though the polish color ended up looking more like pepto bismol pink than the rose color I envisioned from the outside of the bottle, I couldn’t deny that my nails were perfectly manicured.  So I grudgingly embraced the shade and we headed out of the salon for an early dinner.

It had been a wonderful afternoon.  A much-needed reprieve from the every-day chaos that is my life at the moment.   But as I pulled up into the driveway and parked my midnight blue mini-van in the garage, I had to admit that I was happy to be home.  As much as I enjoy those moments away, I love being with my fabulous four.

As I opened the door, I was immediately thrown back into the hectic demands of family life.  Precious little people needed help getting ready for bed.  My one-year-old daughter needed her diaper changed.  My youngest son needed help brushing his teeth and buttoning his pajamas.  Bed-time stories needed to be read, prayers spoken, and hugs and kisses shared.  Dishes needed to be loaded in the dishwasher and toys needed to be picked up.

That night as I was brushing my teeth and getting ready for bed, I caught a glimpse of my hands in the bathroom mirror.  I was instantly annoyed that I had already managed to mar my freshly manicured nails.  Not only were there some indentations in the polish, but I had chipped some of the paint off one of the nails on my right hand.

By the middle of the next day, the paint was chipping off three of the fingernails on my dominant hand.  And by day three, I was starting to lose polish from the nails of both hands.  I barely made it through the week before deciding to give up on my fingernail polish altogether.  Defeated, I peeled off the last remnants of the now gaudy looking pink splotches that stubbornly remained.

I was very aware, however, that the rich merlot color on my toenails was still in perfect form.  Comfortably hidden under socks and footwear most of the time, they still looked as good as the day that I walked out of the salon.  Other than their brief daily exposure to shower droplets and suds, they had been untouched and uncorrupted.  They had also never really been seen or appreciated by anyone.

As silly as it may sound, this got me thinking about life and the way that I want to live mine.

Each need that was met and extra activity pursued was coupled with the potential of bumps, nicks and chips along the way.  But it also came with love and laughter and the satisfaction of doing what needed to be done for the people who I care about the most in this world.

So at the end of the day, my hands may not have looked very pretty, but they had been used to accomplish beautiful things.  And isn’t that what is most important?

Erma Bombeck once said:  “When I stand before God at the end of my life, I would hope that I would not have a single bit of talent left, and could say, ‘I used everything you gave me’.”

I love that quote!  It sums up the kind of woman I want to be.  I want to be a person who uses my intellect, passion, time, talents, and affections – ALL THAT I AM  – to be a blessing to others and to ultimately bring glory to my God.

I’m sure there will be days that I would rather hide behind comfortable excuses and status quo expectations.  I may have moments of idleness, watching others get their hands dirty instead.  I know that I have a long ways to go!

But my heart’s desire is to be USED!  Applied!  Poured out!

So bring on the bumps, nicks, and chips, because these hands have some beautiful work to do! 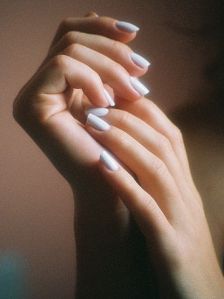 8 thoughts on “A Life Well Used”