To say it was a bad morning would be an enormous understatement.  It was one of those ‘can I please go back to bed and hide under the comforter until tomorrow,’ kind of mornings.  My daughter, who is now 14 months-old, had been up multiple times in the night for the third night in a row!  In her defense, she had just gotten over a second round of a stomach illness.  But honestly, if you aren’t throwing up, why are you waking me up?!

As if my daughter’s late night shenanigans weren’t enough, my middle son decided that he needed to join me in bed at 5:45am.  I have tried hard to establish a “we are not getting out of bed until 7:00 am” rule at my home.  So far, I am the only person who routinely adheres to said rule.

Since my little guy refused to go back to his own bed, I told him he had to lay in mine because I wasn’t ready to get up.  He willingly complied and actually lay completely still… for approximately 30 SECONDS!  Then, for the next 45 minutes, he proceeded to toss and turn and flip around in the bed in such a manner that I was reminded of one of those Nature shows that highlight crocodiles and their feeding habits.

Why a crocodile you may ask?  Because when a crocodile grabs its prey, it proceeds to drag it underwater and drown it through a process called the death roll.  The crocodile spins over and over and over until its prey passes out.  Oh, that I could have been so lucky!  Instead, I had little elbows and knees jabbing me back into consciousness every time I started to doze back to sleep.

Irritated, I finally conceded that it was time to get up and I groggily made my way to the bathroom.  There, I was promptly interrupted by my oldest son who had staggered into the room and greeted me with what I can only describe as a growl.  Apparently he woke up in the same mood that I was currently experiencing, and it wasn’t pleasant.

My oldest son is an amazing kid.  He is smart and his attention to detail puts me to shame.  He has a great sense of humor and can make friends at the playground in about 5 seconds flat.  But he is also extraordinarily MOODY!  A trait he got from his mother, I’m sorry to admit.  And when our moods collide, it can be volatile.

Lately, I have really been working on trying to “keep my cool” with my children.  I would be lying if I said I don’t struggle with anger management from time to time.  I have a temper, and I have been known to lose it once in a while.  It’s not something I am proud of, but it is something I am aware of and something I am working on.  And I do feel like I’ve made some positive strides over the past few weeks.

But as the morning progressed, from mildly irritating to downright ridiculous, I could feel my blood beginning to boil.  I kept it together as the boys fought over their cereal bowls and who was going to sit in the “best” spot at the table.  I firmly, but politely, reminded my children that they needed to respect each other as they started to call each other names, and I doubled downed on that lesson when they started to give me attitude about, oh, I don’t know, EVERYTHING!

My voice started to rise, however, when I had to ask them to put on their jackets for the second, third, and then fourth time.  And I completely lost it when my son threw something at me in the car in an effort to get my attention. I won’t go into the nitty-gritty details of why he needed my attention at that moment.  Let’s just say, it wasn’t a life or death situation.  Although, you would have thought it was, based on the way my son was carrying on.

I’m ashamed to admit it, but when that wad of paper hit me, something inside me snapped.  It was like Mount St. Helen erupting inside the car.  I exploded!  To prove it, I slammed on the brakes, which was a lot less dramatic than it could have been since the snow packed streets caused my car to slide to a stop. But I made up for it, by flinging off my seatbelt and making my way to the back of the van where I proceeded to verbally unload on my already “distraught” 6-year old.

You don’t have to tell me, I already know.  Total. Parent. Fail.

As the tears streamed down his face, I was utterly aware of how out of control and unreasonable I was being in that moment.  Despite the fact that my 6-year-old son was being outrageously over-dramatic and had been difficult all morning long, he did not deserve the treatment he just received.  He is a child.  I am NOT.  And while his poor behavior shouldn’t be ignored, it certainly didn’t justify my “going ballistic,” in the back seat of the mini-van.

We drove the rest of the way to school in silence.  When I parked the car, I turned around with tears in my eyes and apologized for my unfortunate behavior.  My son had calmed down at this point, and though he accepted my apology, I knew I had hurt his little heart.

Breakfast with a girlfriend helped to ease my unrest over what had happened.  As I relayed the events of the morning, she looked at me kindly and said, “You’ve got to give yourself a little grace.”  A mother of six kids, I think she probably knows a little about what she’s talking about.  But while I agreed with her, I couldn’t help but feel guilty about the fact that I hadn’t offered my son much grace that morning.

The thought of his tear streaked face kept popping into my mind, and after putting my two littlest down for their afternoon naps, I lay down on my bed and spent some time in prayer.  I asked God to forgive me for my anger and my lack of self-control.  “Help me get a handle on this Lord!  I need you!” I immediately felt a burden lifted.  God, as He so often does, embraced me with His grace.

As I got up and made my way to the kitchen to start some chores, I saw a school bus out the window.  I breathed another prayer for my son, and then I flipped my computer on to Pandora to listen to some music.  It was pre-set to a worship station.  The first song began to play softly and I caught my breath.  It was “Dare you to Move” by Switchfoot.  My husband, a huge fan, had chosen to play this particular song for our oldest when he was just a newborn.  It was Chad’s special way of saying welcome to the world and welcome to our family.

Chad recently re-introduced the song to our son, sharing with him about how he played the song for him when he was just a few hours old.  Since hearing that story, both of our boys have decided it’s the greatest song on the planet, and they request to hear it almost every time we get into the car.

Here’s the crazy thing, I listen to worship music on Pandora all the time, and I rarely hear a Switchfoot song played in that particular genre.  Of all the songs that could have come on, what are the odds that it would be this one?  I love how God will sometimes answer our prayers in ways we don’t expect!  He knew that I needed that extra little reminder that my son and I are going to be okay.  I’m so grateful that God is in control, and despite my shortcomings, His grace is sufficient for us. 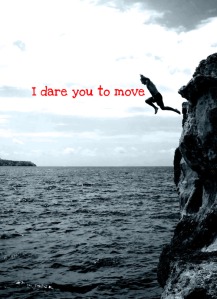 2 thoughts on “Dare You To Move”